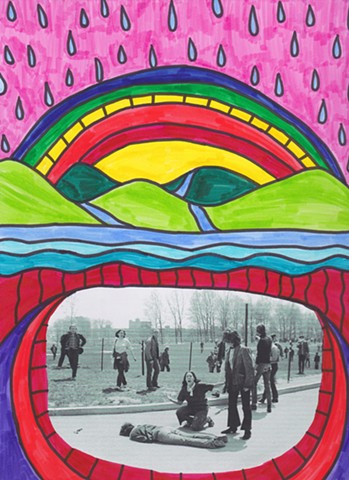 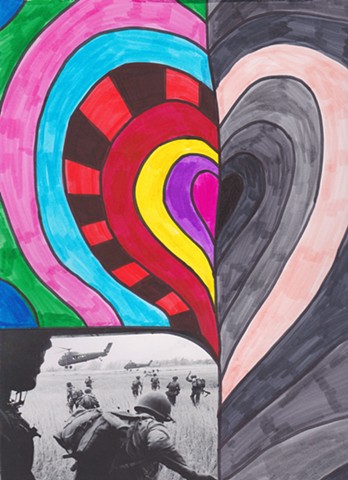 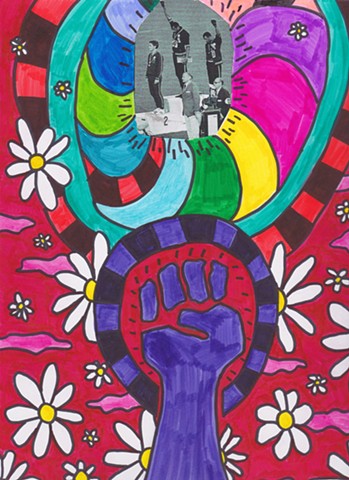 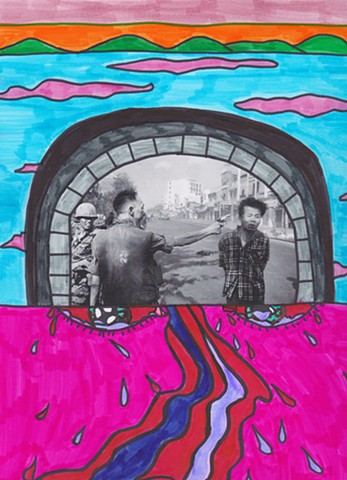 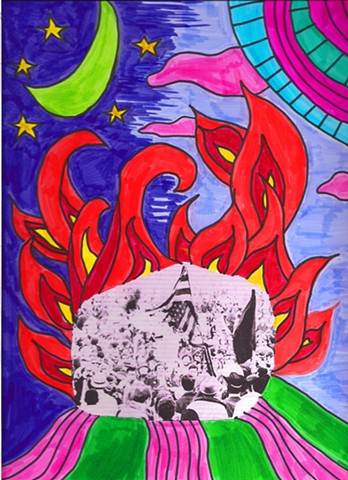 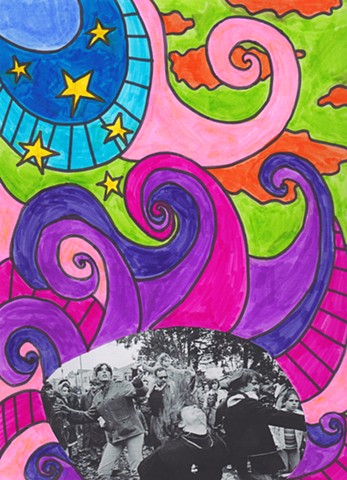 I was born in 1963 in suburban New Jersey. I have a fuzzy recollection of my early childhood as it may relate to my visual world. I have snippets of memories and sound bites of watching, seeing and hearing the ‘televised war’, Vietnam, on my family’s TV; I can recall the sounds of helicopters droning. I can remember seeing images of riots, flags burning, political protests and social unrest as well as viewing photographs of the Hippie Generation and the Black Power Movement. I have often wondered how these iconic images and other forms of media have affected my psyche and influenced my personal world view. How have I, as an artist, been impacted by this plethora and overexposure of photographic imagery?

Revolution: An Unconscious (Deeper) is a current project that explores these ideas. I am using printed copies of images taken during this time period (i.e. a flag burning, an iconic image from the Kent State shootings, Vietnam combat, Hippies dancing, the Black Power salute by Tommie Smith and John Carlos at the 1968 Olympics, and the execution of a Viet Cong prisoner, etc.), creating collages with these, scanning them and then reproducing each as a large 4 ft. x 5 ft. vinyl banner. These works draw inspiration from 1960s protest posters, psychedelia, and album art.

I believe that these works question the very nature of freedom and censorship. As an educator and instructor of Critical Thinking at the City University of New York’s Borough of Manhattan Community College, I spend a lot of time discussing the First Amendment and issues surrounding censorship and the freedom of expression. Revolution: An Unconscious (Deeper) utilizes controversial imagery and calls into question the aestheticization of quite gruesome events and images that are lodged deeply within my mind. To quote Susan Sontag in Regarding the Pain of Others, “A photograph has the advantage of uniting two contradictory features. Their credentials of objectifying were inbuilt. Yet, they always had, necessarily, a point of view.”

I see these works as a synthesis of deeply buried remembrances and personal connotations. Images are freeze-framed and as I try to recollect, I am a spectator in my own life. I am learning that through this process of creating, many of these images and my recollection of them are indeed haunting, yet reconfirm my personal belief that art and the act of creating is a right of individual freedom leading forward on the path of empathy towards human understanding.